One of the most important systems in the bodies of males and females is the one which supports the function of breathing. The structure of the respiratory system consists of several vital components which enable humans to receive oxygen from the surrounding atmosphere and get rid of carbon dioxide. This structure is discussed and explained below in detail. 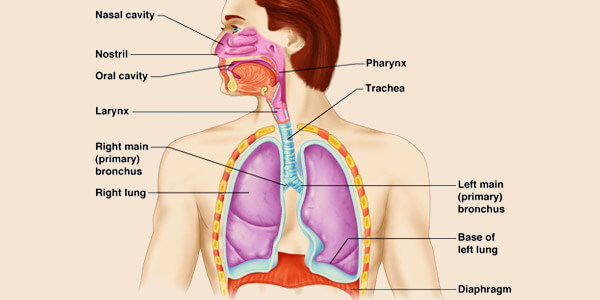 The upper structure of respiratory system is divided into the following important parts.

The process of respiration begins from the nose or mouth which acts as a two-way passage for air. Fresh air enters while the used up air leaves the body through the nostrils or the mouth. This process is termed as breathing. It is preferable to breathe through the nostrils since it can filter the air before it reaches the more delicate components of this system. The walls of the nostrils are lined with tiny hair called vibrissae. A layer of mucous is also present which is a sticky and slimy substance. Both the vibrissae as well as the mucous trap dust particles and pass on purified air to the internal parts of the system.

The layer of epithelium present in the nasal cavity makes the air warm and provides moisture to it. This is important for the process of respiration before the air enters the other parts of the system.

From the nasal cavity, air now enters a tube known as the pharynx. This tube is funnel-shaped and is approximately five inches in length. The main function of this structure is to connect the nasal cavity with the oral cavity. The pharynx also houses lymphatic tissue which produce white blood cells for protection against diseases and infection.

Larynx provides the entrance to the internal components of the respiratory system. The epiglottis, on the other hand, is shaped like a flap and covers the mouth of larynx when food is passing down the adjacent components of the digestive system. In this way, the epiglottis performs an extremely important function of preventing food and water from entering the respiratory tract in order to avoid choking.

Now begin the components which make up the lower structure of respiratory system. These components are explained below in detail.

The trachea is also referred to as the windpipe. The inhaled air passes down from the larynx above to the trachea lying immediately below. The windpipe is a tube which is rigid and muscular. It is 4.5 inches in length and 1 inch in width. Around the walls of the trachea are rings of cartilage which are c-shaped. These rings account for the rigidity of the windpipe and also allow it to remain open instead of collapsing.

The trachea branches off into a pair of bronchi. These are tubes which in turn branch off into smaller tubes referred to as bronchioles. Each bronchus provides passage for the inhaled air to enter into the lungs.

Every male and female contains a pair of lungs which play a significant role in the process of respiration. Lungs are organs which are spongy and filled with air. They reside in the chest cavity and are protected by the ribcage. Each lung contains bronchioles and air-filled sacs which are known as alveoli. Any obstructions or damage to the bronchioles or alveoli can cause respiratory diseases, like asthma.

Diaphragm is a very important muscle used in the process of respiration. It is shaped like a dome and can expand or contract according to breathing movements. When the process of inhalation takes place, the diaphragm contracts and becomes flat. This creates more room in the chest cavity for fresh air to enter. On the contrary, during exhalation, this muscle relaxes and returns to its dome-shaped form. This puts pressure on the lungs to force the used up air out.

Indeed, each and every component of the respiratory system plays a vital role to sustain life. Any birth defect or damage to any of these parts can lead to infections and respiratory diseases.

A graduate in biological sciences and a PhD scholar (NCBA&E University, Lahore), M. Isaac combines his vast experience with a keen and critical eye to create practical and inherently engaging content on the human body. His background as a researcher and instructor at a secondary school enables him to best understand the needs of the beginner level learners and the amateur readers and educate them about how their body works, and how they can adopt a healthier lifestyle.